Tim DeChristopher on All In with Chris Hayes

Watch Tim DeChristopher on All In with Chris Hayes

Climate activist served two years in federal prison for civil disobedience
MSNBC All In with Chris Hayes  | May 15, 2013

Climate activist Tim DeChristopher was released last month from prison after interrupting a Bush era oil and drilling auction in 2008. Chris Hayes talks to DeChristopher about his experiences and upcoming film, Bidder 70.

Democracy Now! Video Description:
In a Democracy Now! exclusive on Earth Day, climate change activist Tim DeChristopher joins us for his first interview since being released from federal custody after serving 21 months in detention. DeChristopher was convicted of interfering with a 2008 public auction when he disrupted the Bush administration’s last-minute move to sell off oil and gas exploitation rights in Utah. He posed as a bidder and won drilling lease rights to 22,000 acres of land in an attempt to save the property from oil and gas extraction. The auction itself was later overturned and declared illegal, a fact that DeChristopher’s defense attorneys were prevented from telling the jury. His case is the subject of the documentary, "Bidder 70," which will screen all over the country today to mark his release and Earth Day. The founder of the climate justice group Peaceful Uprising, Tim DeChristopher joins us to discuss his ordeal, his newfound freedom, and his plans to continue his activism in the climate justice movement.

Apparently there is some street art of Tim in New York City.  If you happen upon any other street art related to climate activism, tweet a photo and tag @DeChristopher. We'd love to see it. 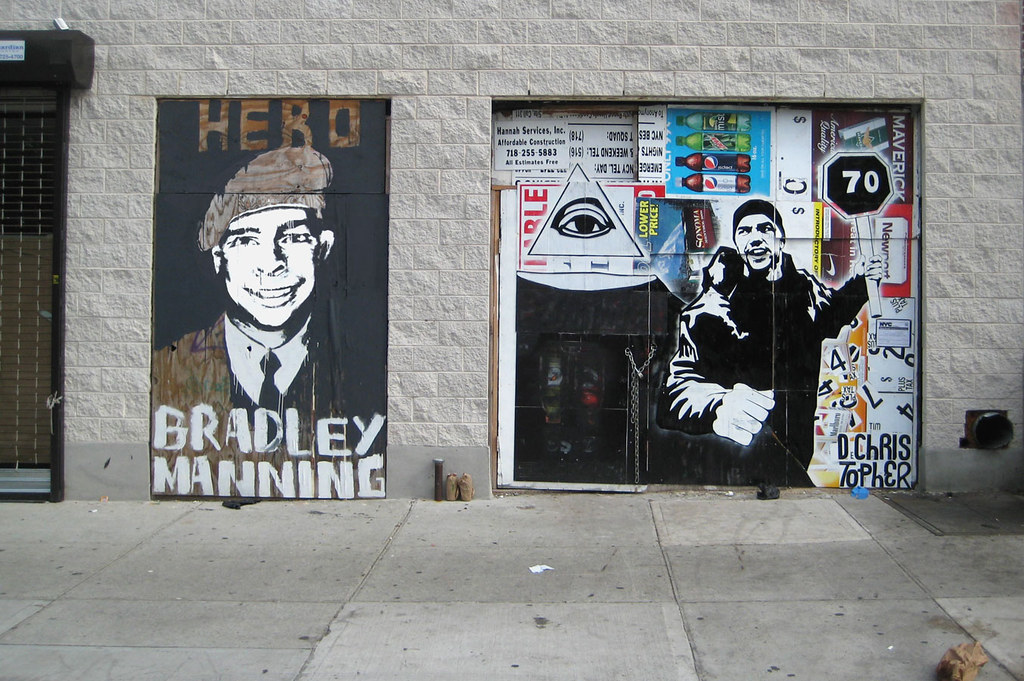 "At this point of unimaginable threats on the horizon, this is what hope looks like.  In these times of a morally bankrupt government that has sold out its principles, this is what patriotism looks like.  With countless lives on the line, this is what love looks like, and it will only grow.  The choice you are making today is what side are you on."

Tim was allowed to address the court and the judge during his sentencing hearing. This is what he said:

Thank you for the opportunity to speak before the court.  When I first met Mr. Manross, the sentencing officer who prepared the pre-sentence report, he explained that it was essentially his job to “get to know me.”  He said he had to get to know who I really was and why I did what I did in order to decide what kind of sentence was appropriate.  I was struck by the fact that he was the first person in this courthouse to call me by my first name, or even really look me in the eye.  I appreciate this opportunity to speak openly to you for the first time.  I'm not here asking for your mercy, but I am here asking that you know me.

Mr. Huber has leveled a lot of character attacks at me, many of which are contrary to Mr. Manross's report.  While reading Mr Huber's critiques of my character and my integrity, as well as his assumptions about my motivations, I was reminded that Mr Huber and I have never had a conversation.

The United States Attorney, by and through the undersigned Assistant United States Attorneys, hereby submits this sentencing memorandum to assist the Court in determining an appropriate sentence for the defendant. Based upon Title 18 of the United States Code, section 3553(a), this Court should impose a significant term of imprisonment to accomplish a fair and reasonable sentence in this matter. In particular, a term of imprisonment will (a) comport with the nature and circumstances of the offense and the history and characteristics of the defendant; (b) reflect the seriousness of the offense, promote respect for the law, and provide just punishment for the offense; (c) afford adequate deterrence to criminal conduct; and (d) protect the public from further crimes of the defendant. The Court may also consider other aspects of the sentence, including a fine and restitution.

A.   The Nature and Circumstances of the Offense and the History and Characteristics of the Defendant

In determining an appropriate sentence to be imposed, one of the Court’s requirements is to “consider the nature and circumstances of the offense and the history and characteristics of the defendant.” 18 U.S. C. 3553(a)(1). To be sure, the defendant’s crimes are serious. He lied, obstructed lawful government proceedings, and caused extraordinary loss to others. Unilaterally, he played out the parts of accuser, jury, and judge as he determined the fate of the oil and gas lease auction and its participants that day.

Yes, we are talking about a Revolution

In Support of Tim DeChristopher

This letter was co-written by five leaders of social and environmental justice. All recognize the trial of Tim DeChristopher to be a turning point in the climate movement:

A few months back, you likely heard about a vitally important court case involving the prosecution of a principled young environmental activist named Tim DeChristopher. After several delays, that trial is back on and we are asking for your support on its openings days starting February 28th.